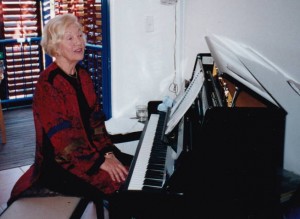 Margot Balfour Dods, our Life Patron, passed away on 6 February 2013.

Margot was the Society’s patron, foundation member, past President, past Artistic Director, mentor and inspiration. Some would even say she was our matriarch.

Herself an accomplished professional musician, Margot worked for many years as a broadcast planner for ABC radio. Her large network of musical contacts allowed her to bring first class classical musicians to Byron Shire.

As well as building the Society and organising over a hundred performances, Margot played a vital role in the acquisition of the Steinway grand piano for the Byron Community Centre. It was her drive and enthusiasm that inspired members to give generously for the purchase of the Steinway.

Margot resigned from the Committee at the 2012 AGM, though she continued to attend performances, provide advice, and take an active interest in the workings of the Society.

Her citation states:
For service to music through administrative roles.

Margot passed away just eleven days after being awarded this honour.

The Byron Music Society has also honoured Margot. At the Annual General Meeting in February 2012 Margot was named Life Patron of the Society. This is the first (and only) time that the Society has proclaimed a Life Patron.

Margot will be sorely missed by us all.